"The Cutter With the Most Gold" 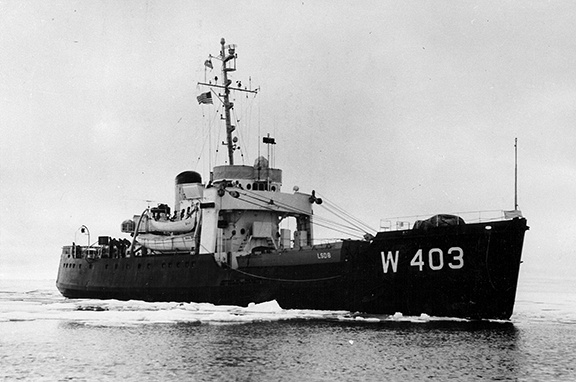 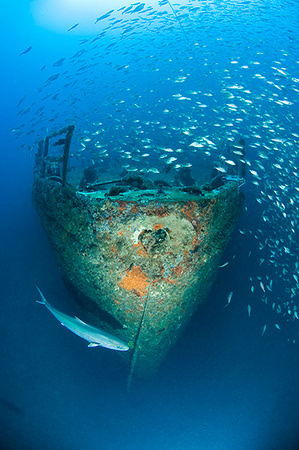 Hovering at a depth of 80 feet of seawater, only a few inches over the foredeck of the wreck, I remained motionless while breathing slowly so as not to startle my prey with the noisy bubbles venting from my regulator.  After waiting nearly ten minutes, several targets in the distance slowly approached to within range for a shot and my patience was about to pay off.  An enormous sand tiger shark 10 feet in length slowly approached me from the head-on not heeding my presence.  I lined my sights up on the rows of the gnarly ragged teeth jutting out of its mouth and just when it seemed she was going to bump in to my dome port, I fired off a round of shots from my digital SLR camera.  Snap, snap, snap!  The brilliant flash of the twin-strobes fired in rapid succession didn’t alarm the shark as it continued to advance on me.  I lowered the bulky camera housing and made an effort to back out of the situation to avoid contact. My sudden movement got the sharks attention; within a split-second the once languid sand tiger instantly sprang to life as it whipped around folding it's body nearly in half until pointing nearly in the opposite direction. The lighting speed snapping motion of the tail created a cracking sound like a muffled shotgun blast. Instinctively, I covered my face with hand so the concussion of water wouldn’t knock my mask off. A turbulent wall of water knocked me for a spin but, luckily with no further dire consequences for the shark or myself.  When I dropped my hand all I could see was the faint outline of the shark speeding away from me in to the blue water. Phew, I could now take a deep breath and allow my heart rate to return to a normal pace while reviewing the images on the camera which I hoped to yield at least one "keeper".

This is but one of many of my memorable encounters with Carcharias taurus on the wreck of the United States Coast Guard Cutter, Spar. She was sank 26 nautical miles due south of Morehead City as part of the North Carolina artificial reef program in 2004 and has become one of the most sought after wreck dives in the region primarily due to her abundance of marine life, highlighted with the ever present sand tiger sharks. The Spar is visited every year by hundreds of sport diving enthusiasts from all over the country and even the world to experience the thrill and excitement of wreck diving with these enigmatic creatures. However, I suspect many who dived upon her rusting hulk are unaware of the distinguished career the Spar had with the US Coast Guard prior to her sinking and many others may have never heard of Spar to begin with. I'm going to change this as of right now. 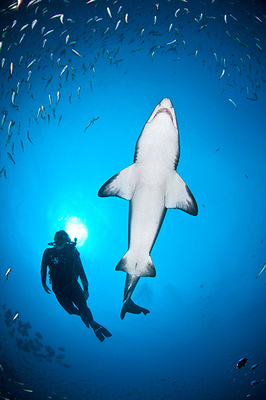 The USCG's motto is Semper Paratus; Always Ready whose acronym spells SPAR. The Spar was commissioned on June 12, 1944 as part of the Coast Guards program to develop a new class of buoy tender that was initiated in early 1941, prior to the outbreak of WWII. This new class of tender was designed to fulfill the service’s multi-mission role to conduct search and rescue operations (SAR), law enforcement missions (LE) as well as their primary mission of tending to aids to navigation (ATON). The new class of tender measured 180 feet overall and known as the 180 class tenders. The 180's, also known as Iris class, had a beam of 37 feet at her widest point and drew 13 feet of water with a displacement of 935 tons. They were propelled by a single screw electric turbine motor powered by twin diesel generators with a 30,000 fuel gallon capacity and a max speed of 13 knots sustained.  A reinforced bow and an ice belt at the waterline gave the vessel ice-breaking abilities and with design modifications to the hull it made her a more seaworthy vessel then her predecessors.

By the time the Spar's keel was laid in September of 1943 at the Marine Iron and Shipbuilding Corporation in Duluth, MN, WWII was already in full swing and the industrial might of America at this time was at it's peak. All of the thirty-nine '180 class' buoy tenders were produced between 1941 and 1944 at two shipyards in Duluth. With much of the male workforce off fighting in the war, shipyards began turning to women by the thousands as electricians, welders and machinists in Minnesota. These women workers, also known as "welderettes", played a key role in the production of the USCG modern class buoy tenders and their efforts in the war should not be discounted. 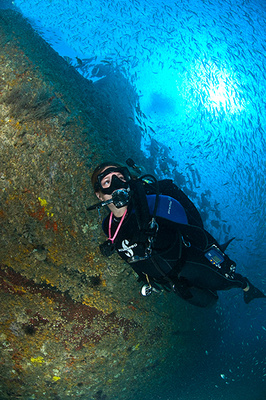 The Spar was placed in to service in June of 1944 and participated as a convoy escort in anti-submarine warfare off the coast of Brazil. To protect the ship and her crew of 6 officers and 74 crew, the Spar was fitted with an assortment of weapons. To defend against air attack she was fitted with four-20mm guns two on the superstructure and two on the aft section. A single 3 inch cannon was mounted aft of the stack to attack air and surface targets. Depth charge racks mounted on the stern were installed and a device called a 'mousetrap' was mounted on the bow to defend against enemy submarine attacks.  A 'mousetrap' was a rocket-propelled explosive that was designed to detonate on impact of a submarine hull. The Spar, although equipped for action, did not encounter the enemy in the war. She served her country well all the same. 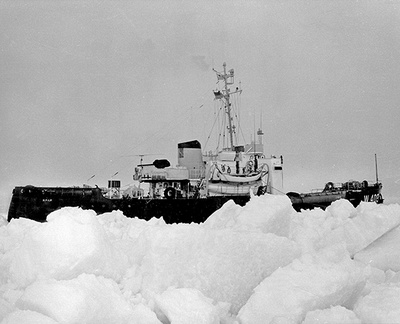 After the war ended, the Spar was permanently stationed in Woods Hole, MA until 1951 where she was relocated to Bristol, R.I. at that time. In 1957, she was assigned the duty of conducting hydrographic surveys in the Northwest Passage and it would be here where her ice breaking capabilities would play a key role. There were several occasions where the Spar was locked up by ice flows and stuck for days on end. The Spar during the course of this mission became the first ship to circumnavigate North America. During the course of this mission she logged over 17,000 miles and visited over 6 countries including Germany, Iceland and Norway.

Retired USCG Third Class Petty Officer, Tom Hough, who served on the Spar as an Engine Man during this three and one half month long epic journey reported how ship and crew had weathered two immense storms that lasted two weeks each with wave heights entered in the ships log as tall as 90 feet. Tom recalls, "The trip is crystal clear in my mind, always was. At the time of the storms you could hear shipmates praying aloud in their racks. The cooks could not work so we ate peanut butter and saltine sandwiches. They were called mountainous seas, so we got it from bow to stern and port to starboard. We slid down those hills sideways. We had to tie ourselves in the rack with rope to prevent being thrown out." After the journey was over, President Dwight D. Eisenhower sent his personal congratulations to the crew of the Spar for their remarkable accomplishment in their steadfast vessel.

In 1973, the Spar was relocated once again to Portland, ME where she served general duties maintaining New England Coastal navigational aids in waters that were known for their rocky and treacherous shoreline. To be able to pilot a vessel with success in such hazardous waters leaves much to be said for the superior skill of the crew. 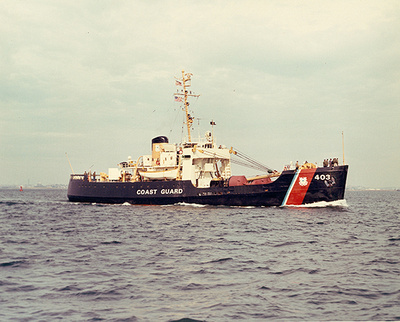 It was in 1981 where the Spar was noted for her outstanding service when she scored the highest marks by any ocean going tender in the fleet at Refresher Training in Little Creek, VA. In following years, she would accumulate additional high scores and proudly displayed a gold "E" with three gold service stripes for eight consecutive overall excellent scores in operations and seamanship training. Vice-Admiral Paul Welling, the commander of the Atlantic Area (LANTAREA), recognized the Spar as "The Cutter with the Most Gold" in the Atlantic Fleet.

The Spar's career came to a halt when she was decommissioned in February of 1997 and placed in to storage at the Coast Guard yard in Curtis Bay, MD. Her illustrious duties of course were far from over. After collecting rust for seven years the Spar was purchased by the State of North Carolina and sent to the bottom of the Atlantic to become an artificial reef to attract fish life for sport fishing and recreational scuba diving.

Today, the Spar is one of the hottest wreck dives off the North Carolina Coast. With a max depth of only 110 feet and the shallowest point at 75 feet she appeals to divers with beginner to expert skills alike. The water temp in the summer months can climb as high as 82 degrees on the bottom with average visibility at a respectable 60-70 feet. To prep the Spar for her new role as an artificial reef, a section of the aft super structure was removed to access the engine room and remove her turbine. This surgical procedure left a large hole in the deck for divers to access the inner workings of the ship.  Penetrating the other areas of the Spar is fairly simple and makes her suitable for instructors to conduct advanced diver training. 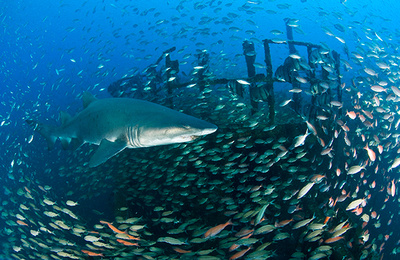 On a good day a dozen or more sand tigers can be found hanging about the wreck as well as large schools of Atlantic spade Fish that tend to collect around the tall superstructure. Fearless greater amber jacks regularly sneak up behind divers coming to within arms reach and even several different species of moray eels can be spotted regularly living within the cracks and crevices of the wreck. On occasions divers can have the added thrill of seeing giant southern stingrays take a leisurely swim past them with wingspans greater than five feet across. Cobia, a large popular game fish on the East Coast are often seen swimming behind and underneath the stingray darting to and fro like frolicking children.

In the summer of 2011, Hurricane Irene blew right over the resting place of the Spar before clobbering the east coast of the USA. Several days later when we went to dive the Spar she was gone. The surge from the enormous waves pushed the rugged ship more than 200 feet from her previous location and rolled her on to her port side. The steadfast little ship however was still intact, sporting mere cosmetic wounds. 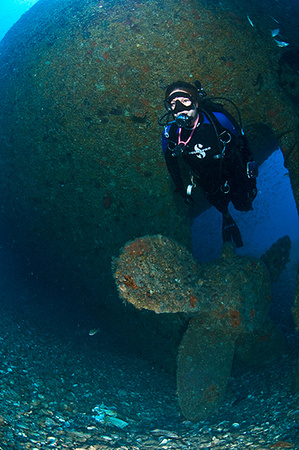 The wreck of the Spar may be only a modest 180' long and not have the proportions and memorable battle history as the WWII aircraft carrier USS Saratoga. She may also not offer the same diving challenges as the Mount Everest of wrecks, the Andrea Doria but her great accomplishments and story deserves attention all the same. Let it not be forgotten that this ship and her crew served it's country to the best of it's abilities in war and in peace time and continues to serve today as a stunning and marvelous dive sight. The "Cutter With the Most Gold" just keeps on giving.

Special thanks to retired USCG Third Class Petty Officer, Tom Hough for furnishing me with photos and first hand accounts of life on board the Spar.

Contact Olympus Dive Center in Morehead City, North Carolina for information on how to dive the wreck of the Spar. [email protected]