Toothy sharks and historic wrecks highlight epic diving
off the North Carolina Coast, and the legendary WWII German Sub, U-352. 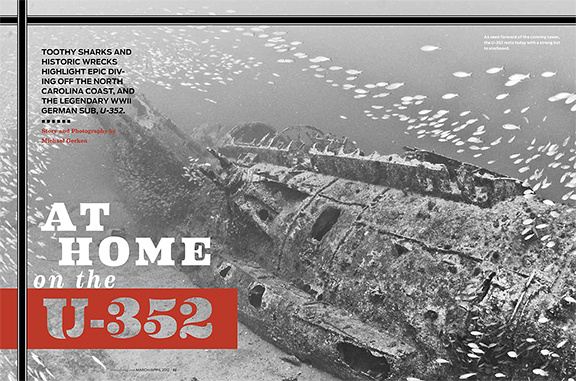 The first two pages of the Scuba Diving Magazine article.

The flagstaff proudly stands tall over Fort Macon State Park in North Carolina, but the flag attached to it is flapping wildly in the robust southerly wind. Which tells me one thing: It’s going to be a rough ride out.

As we round the point at Fort Macon, a strong outgoing tide collides with incoming seas, tossing our 48-foot boat around like a tub toy. I pull back on the throttles and tell the crew to warn the passengers to hold on tight. Many of the 18 divers on board today have been to our scheduled site before and understand the elements are just one obstacle to overcome in order to dive it. Still, the ride is never fun in these conditions.

Waves wash over the bow and I set the boat’s heading to a point 28 nautical miles south of Morehead City, into the open Atlantic Ocean, and the final resting place of one of WWII’s most famous wrecks.

On May 9, 1942, in the early phases of the American involvement in WWII, the German submarine U-352, captained by Kapitanleutnant Helmut Rathke, was patrolling close to America’s Eastern seaboard in search of enemy ships. As fate would have it that morning, the U-352 crossed paths with the USCG Cutter Icarus and commenced an attack on the unsuspecting ship.

After launching torpedoes that missed their mark and a short but deadly game of cat and mouse that followed, the Icarus prevailed in a battle that sent the U-boat — with 14 men — to the bottom.

The surviving crew were rescued by the Icarus and brought to Charleston, South Carolina, where they would spend the rest of the war in detention as prisoners.

The small but significant battle marked the first time crew of a German U-boat had been captured alive off the American coast. And several decades later, the wreck that sank to the bottom would become one of the most sought-after dives in America.

A Panoramic image of the U-352 as she appears today in her entirety.

After nearly 90 minutes of travel across open-ocean, we arrive at our destination; thewreck of the U-352 lies 110 feet beneath us. As swells pass underneath our boat’s hull, it takes a few moments for the crew to secure us to the wreck; I’m told a “mild” current (by North Carolina standards) is running down its length.

The Gulf Stream, with its warm, clear tropical waters, pushes farther north and closer to the eastern seaboard during the summer, creating some fantastic dive conditions. And yet these same forces that carry the tropical waters also bring strong currents to the wrecks, which can be problematic for novice divers. “Descend on the anchor line and ascend on the anchor line,” I warn my divers. I don’t want anyone adrift in the Atlantic Ocean 30 miles from land. 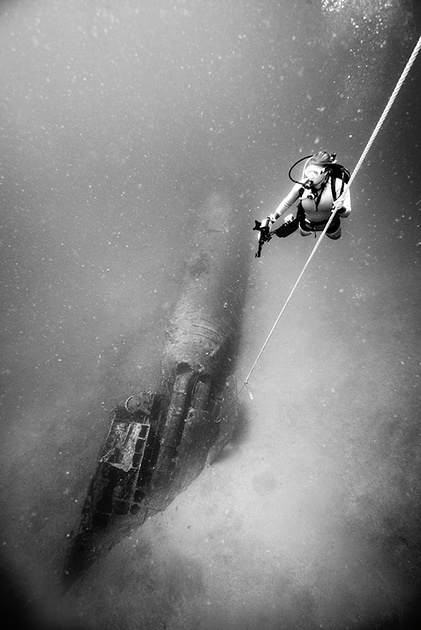 On this day, nearly half of the divers don twin tanks for redundancy, while the other half sports single tanks with a pony bottle clipped to their BCs. With a maximum depth of 110 feet and minimum depth of 100, most opt for a mix of 30 percent nitrox in their main tank, to allow them a few extra minutes of bottom time.

One by one they giant stride off the deck and splash down, immediately grabbing the current line and disappearing underwater as they pull themselves hand over hand down the anchor line, past curious oversize barracudas and toward the nearly intact wreck below.

After 30 to 40 minutes, the divers begin returning to the boat. Some of the divers have waited years, and most undergone wreck or deep- or mixed-gas training to dive this wreck. Their grins of satisfaction tell me conditions below were pristine. So with everyone aboard and safely accounted for, it’s my turn to dive. With camera in hand I descend toward the sub; at 30 feet, I begin to see the faint outline of the U-boat and start shooting.

All of the divers who come to North Carolina have their own personal reasons to dive the sub. For me, it’s an interest in WWII history that keeps me going even with more than 100 dives logged on it. Each time I swim down the length of this 200-foot-long warship I feel like I’ve stepped back in time.

I arrive first at the torpedo tubes, lying on a slight angle in the sand, and wonder how history would’ve been forever inexorably altered had the weapons fired from here met their mark. Chances are I’d be diving on the remains of the USCG Cutter Icarus instead.

I move to the fore deck, where I peer into the open hatches to see the cramped living space. For weeks at a time, German sailors lived, fought and died  within these close confined quarters. U-352 is a war grave; it illegal to enter and/or remove artifacts; so I stay on the outside; still, I can see high silt levels have accumulated over the past 70 years. 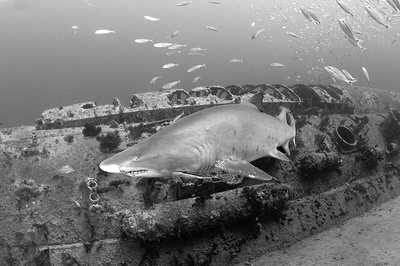 Midway down the wreck, I come upon the conning tower enveloped in a large school of bait.  After penetrating the dense cloud of fish I approach the access hatch. It was through this narrow opening that the crew of the U-352 made their desperate escape from the sinking ship, while the Icarus continued to fire upon the submariners with deck guns as they leapt in to the water. (The crew of the Icarus had believed the escaping men of the U-352 were manning their own guns and fired in self-defense.) Gazing in to the open hatchway that leads in to the control room I think of the grim fate of the men who never made it out and have transformed the ship in to a watery grave. The cold reality of war is never more apparent.

I lift my head from the hatchway and am suddenly confronted with a rare sighting; three large sand tiger sharks, 7 feet long, cruising alongside the hull. Although common on many of the other wrecks of North Carolina, they are seen with less frequency on the U-Boat. I steady my breathing and minimize movement so as not to startle the shark closest to me; I  focus my camera on the gnarly row of teeth and fire off a few shots in succession before it nearly bumps in to my dome port. I lower the camera and glance at my dive computer; my time is up.

As soon as my head breaks the surface, my full attention steers away from the thrill of the dive to my primary task at hand; getting my divers to the next dive site. Today, we decide to head over to the nearby wreck of the USCG Cutter Spar.

Although sunk as part of the artificial reef program of North Carolina in 2004, the 180' long Spar has it’s own compelling history. Built in 1944, the Spar was briefly utilized as an armed Cutter to protect allied shipping from prowling German subs like the U-352. She continued to serve the Coast Guard extensively after the war until 1994 when she was decommissioned. Though the Spar has a rich history, that isn’t the draw; since its sinking, the Spar has been one of the go-to wrecks for near-guaranteed shark sightings.

"Do not swim after them or try to touch them, I caution the divers. “They are more scared of you than we are of them". In no time at all the divers jump over the side with the excitement of kids being cut loose on a playground. Fast forward to their return to the boat, where, one by one, they climb back aboard with great smiles on their faces. As on the U-352 the conditions are perfect today, and I decide to head in once again after all the divers are up. 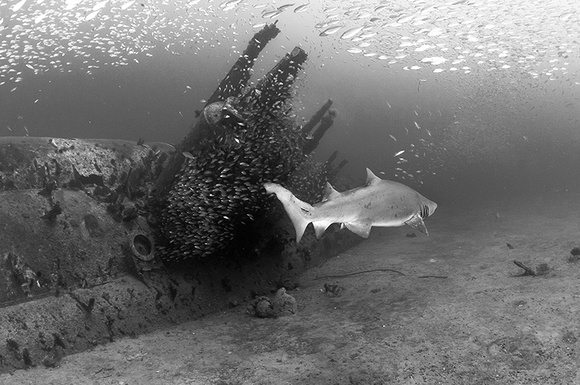 After Hurricane Irene, the Spar moved 200 feet from it’s original position and heeled over hard onto its port side. Very few have had the opportunity since Irene to dive on the wreck; its new position make it seem like a new wreck to me.

As I descend, I immediately see a half a dozen sharks slowly milling about the foredeck and stop at 90' to shoot off some photos.  Sand tiger sharks are one of my favorite subjects to shoot in North Carolina and with a photogenic wreck like the Spar as a back drop, it is even more enjoyable.

It may sound easy, but I have to be patient with models that don’t always cooperate. I snap a few keepers and wander to the stern to see if there is any action at the other end; here I find another 6-10 sharks milling about in the sand and on the deck.

With no shortage of subject matter on this dive I could stay another 30 minutes or more but bottom time is a premium; I take a few more shots and then begin my ascent. It is time I got the divers back to shore.

As I turn the boat for home, a steady tail wind creates a following sea that allows for an easier ride in. Tales of the days events, emanate from the cabin below, begin to fade as each diver nods off after a long but fulfilling day. As I back the boat in to the slip, I feel a level of personal satisfaction, as I do after each charter, taking part in revealing to these divers what North Carolina wreck diving is all about.