A Destroyer's Fight for Survival

The wreck of the Fumitsuki in its entirety. Thirty separate images were used to create this composite print.

The initial time I set eyes on the wreck of the Fumitsuki, I knew she was remarkable. Sitting erect in 120 feet of seawater on the sandy bed of Truk Lagoon in Micronesia, this World War II Japanese destroyer was a physical archive of history standing before me.Canons with boxes of shells nearby, anti-aircraft guns, torpedo launchers, depth charges and personal effects from within the wreck, are only a few of the interesting items to be seen. Rarely will you find anywhere in the world a Japanese war ship that is as fully intact and loaded with artifacts such as the Fumitsuki. In 2003, I dived the wreck during my first week of employment on board the liveaboard dive vessel, the Truk Aggressor II; I immediately  knew this wreck was going to be my personal favorite. For the next six years working in Truk, I would log nearly two hundred dives on the Fumitsuki and discover a new and interesting facet about her each and every time.

The Fumitsuki was one of twelve Mutsuki class destroyers built in 1926 during an era when the Japanese were evolving in to a world military power. With an overall length of 320 feet, a top speed of 33 knots and armed with six 24” torpedo tubes (3 fore and 3 aft), this class of destroyer was a formidable weapon. In addition, the Fumitsuki was armed with 4 - 4.7” 50 caliper canons, 10-25mm anti-aircraft guns, minesweeping equipment and depth charge capabilities. Whereas Japanese battleships were given names of mountains or provinces, destroyers were named after meteorological events such as the Fuyutsuki, (Winter Moon), the Tachikaze (Earth Severing Wind) or the Fumitsuki (Month of the Rice Flower) whose literal translation is the month of July.

In 1941, the aging Mutsuki class destroyers were pulled from front line duties. The Fumitsuki was re-equipped with additional depth charges while two of her canons and one torpedo launcher were removed in her conversion to an escort destroyer and troop transport.  The destroyer fleet, totaling no more than 130 ships at any point in the war, had the distinction of being the workhorses of the Japanese Imperial Navy and were incremental in winning numerous historic naval campaigns in the early stages of WWII. The Fumitsuki and the many other escort destroyers, with their high-speed capabilities, played a valuable role in delivering supplies and troops quickly and efficiently to the numerous island nations spread out over a vast area that was the Pacific theatre of battle. She would be damaged in the course of her service three times in 1943, but would return each time to full duty. In January of 1944, the Fumitzuki and one other destroyer, reported being attacked by more than 80 US aircraft; shooting down 10 of them. This victory would be short lived.

Soon thereafter, the Fumitsuki would be transferred to the Japanese naval stronghold of Truk Lagoon to receive repairs from damage sustained in an attack at Rabaul, New Guinea, a location then under heavy allied assault. It was here, at Truk, in the repair anchorage, that the Fumitsuki would encounter the onslaught of US air power on the morning of February 17, 1944.

Truk Lagoon was Japan’s largest outlying military facility during the war. It’s 140 miles of barrier reef with deep anchorages within made it ideal as a naval and air facility. As WWII progressed, Japan found themselves in a full retreat and by early 1944, Truk Lagoon became the next likely target for US forces advancing rapidly across the Pacific. The Japanese commanders then deemed Truk unsafe for their naval warships and evacuated the fleet from the lagoon.

On February 17, 1944, a carrier based aerial assault, codenamed Operation Hailstone, was carried out by a force of more than 400 carrier based US planes on Truk. For the next 48 hours more then three-dozen merchant ships (also known as Maru’s) would be sent to the bottom of the lagoon and 280 planes destroyed in the air and on the ground. The Fumitsuki would also perish in the attack, but not before putting up a fight. This valiant struggle to survive is far more compelling story than those of the merchant ships who were mostly unable to defend themselves and were sunk while at anchor.

The worst thing that can befall a wartime captain is to have his vessel caught at anchor during an air raid. Unable to maneuver, the captain and ship would be a sitting duck at the mercy of the attackers. Commander Nagakura of the Fumitsuki would find himself in this quandary on that early morning of the attacks. Unable to make way, due to repairs being facilitated, the Fumitsuki defended itself to the best of its ability by opening fire upon the assaulting planes with anti-aircraft guns.

Later in the morning, with the use of only one engine, the Fumitsuki managed to get underway. While under relentless machine gun fire from US planes, the Captain attempted to maneuver his ship in a zigzag pattern into the safety of open water. She managed to avoid direct hits of up to four aerial bombs, but one near miss struck close to her port stern and inflicted enough damage to cause the ship to take on water in the engine room and loose headway.

Salvage attempts were made on the Fumitsuki, but with no success. After struggling for the next 20 hours, she was reported sunk at sun up the next day. The crew of the Fumitsuki fought bravely in the defense of their ship with seven men making the ultimate sacrifice. Unlike most of their merchant mariner comrades that were defenseless, the Fumitsuki crew had the distinguished honor of pushing the limits of their skills and crippled ship and fought until the end. 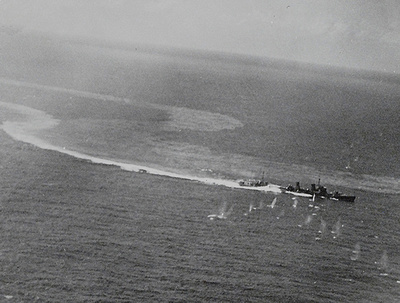 It is this piece of history along with my creative imagination that propelled the Fumitsuki into the status of my ‘favorite wreck dive’ in Truk Lagoon. As I swim down the length of the wreck, I see the chaotic scene of planes strafing the deck of the ship while the crew scramble for cover. Aerial bombs are exploding all around with near misses sending plumes of water in to the air before raining down upon ship. I can visualize the crew darting to and fro upon the deck tending to wounded sailors, manning the guns and fighting with tenacity for their very survival. I peer in to the remains of the wheelhouse and envision the captain firing off commands in rapid-fire succession to his officers while trying to maintain his composure.

Midway down the wreck, the anti-aircraft gun deck is a beehive of activity with twin 25mm guns blazing away in a deafening rattle while the smoke clears away under the strong breeze gusting over the deck. The scene that is unfolding before me is not thrilling or glorious, but miserable and horrid -- the way war always is. 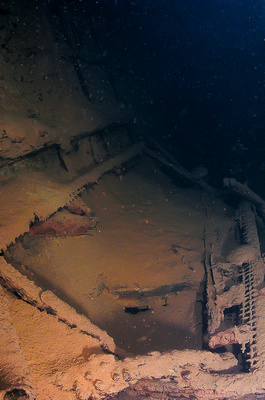 When I penetrate in to the tight confines of the living quarters under the foredeck, I see the tiny fold down racks where the sailors slept. I think to myself, “what was it like trying to sleep so far forward in a destroyer in rough seas?” The pitching and yawing of the vessel would toss you around violently unless strapped in to your bunk. I spoke to an American Navy veteran some years ago who served on a destroyer after WWII. He said when crews from other branches of the navy returned to port they went out on the town to celebrate while destroyer crews went to sleep. Life on board at sea was just too exhausting to think about doing anything else when first back on land.

Within the wreck there are numerous historical artifacts to be found. The state of Chuuk, as Truk Lagoon is known today, has declared the wrecks a national treasure making it illegal to remove anything from them. Since they cannot be taken, honest divers, conveniently display artifacts they have discovered at strategic points around the wrecks for others to enjoy. Although many artifacts have been stolen over the years, the wrecks still hold many treasures within.

During my many explorations of the Fumitsuki, I have found medical kits fully stocked with bottles and supplies, instruction manuals still legible, lamps with intact bulbs that once illuminated the living spaces, numerous types of bottles, shoes, ammunition, electric fans and even human remains. It is a sobering reminder for me as to what took place here when I come across the bones of another. I think that this individual may have died more from the reckless leadership of generals and politicians and less from a bullet or bomb from a US plane.

Diving the Fumitsuki is not exclusively about bombs, bullets and mayhem. When I snap out of my imaginary state I find myself surrounded by the reality of what this wreck has become today. She is blanketed with an array of marine life such as sea fans, soft corals, black corals and magnificent sea anemones. Many fish species such as the noble napoleon wrasse, the peculiar looking guitar shark and schools of marauding emperor fish are seen with regularity. 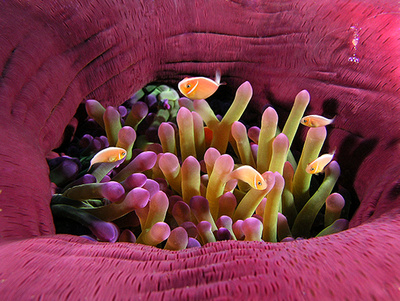 This wreck, for me, is full of these contrasting images. One minute I’m contemplating the brutality of war while the next, I’m absorbed in a fanciful moment with a beautiful pink anemone fish darting in and out of the lush tentacles of its host. It is surreal down there with limitless entertainment mixed in with moments of reflection. The Fumitsuki is indeed an interesting shipwreck, but the stories of this wreck and others like her are not always apparent. With a little research and a keen imagination anyone can find the fascinating history lurking within their remains.

Several years ago, time had taken its toll on the Fumitsuki. The bow section of the wreck was reported to have collapsed opening up the forward section. Much of what is described here and the photos posted are inaccurate to how the ship appears today. The author has yet to see the wreck in this altered state.

The WWII Wrecks of the Truk Lagoon; authored by Dan Bailey; copyrighted 2000.