Gathering of the Sand Tigers
“Wreck Diving with Sharks” 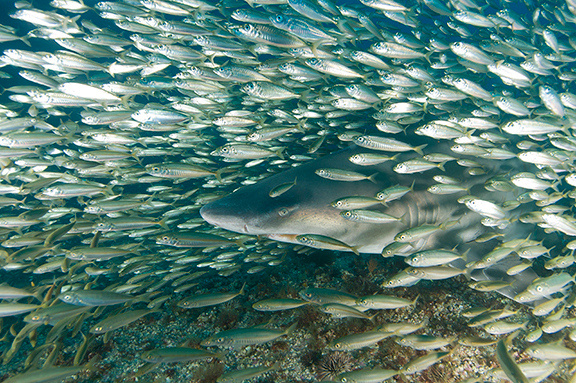 I gripped the handrail tightly as the boat pitches and yaws in the choppy seas.  The weight of the dive tank on my back, along with the July sun, causes sweat to pour down my face. I wait patiently for the captain to give me the go-ahead to jump into the restless ocean with the anchor and secure the boat to the wreck of the Atlas tanker 110’ below. Today, we seek out the grand attraction for our eighteen divers on board; Carcharias taurus or the sand tiger shark, wreck denizen of the North Carolina coast.

With several rows of gnarly, pointed teeth projecting from their jaws and small beady eyes that seemingly look everywhere at once, the sand tiger is renown for being the meanest looking of shark species.

Unlike dolphins, which instill feelings of joy, the sight of a sand tiger can invoke an atmosphere of danger and aggression. Ranging in size from 4-10 feet, this shark can intimidate even the boldest of divers. However, this threatening image is far from reality. The sand tiger is a docile, lethargic species that, with proper technique, is easily approachable.

The rusted remains of the Atlas are notorious for attracting sizeable populations of these amazing predators. During the early stages of World War II, the Atlas was attacked and sunk by a German U-boat off the Carolina coast in 1942.  At the time, no one could have fathomed that this wreck, with its tragic history, would become a favorite haunt for sand tiger sharks and the scores of marine life that co-exist with them.

My pulse quickened as the boat slowed and crawled nearer to our target. The tension brought on by the thought of jumping in to an ocean full of sharks is only heightened by the fact that the water clarity on the wreck is often low by North Carolina standards. The eerie mood of this hazy water has given the wreck the reputation of being haunted by divers who have frequented it over the years. This feeling is only magnified by the fact that dozens of large toothy creatures are lurking about.

Once we are over the wreck, I secure my full-face mask, equipped with surface communication, and nervously wait for the final order. Seconds later the captain shouts “OK” as he pulls back on his throttles to halt the forward motion of the boat. In a flash, I’m over the side clutching the anchor and a coil of chain in my hand. As soon as my feet hit the water I invert in to a head down position and make a mad dash for the wreck that lies unseen 80-110 feet directly below.

At first, the ocean possesses a beautiful azure tone, but dissipates rapidly to a green hue the further I travel from the reach of the sun. After a few moments of vigorous kicking, I begin to see what I believe to be the top of the wreck below me. To my surprise, the Atlas has come to life and is moving!  I slow my descent as I tried to make sense of this scene. After only a few moments it quickly becomes apparent that it wasn’t the wreck that was shifting, but a layer of at least 40 sentinels hovering over the upper sections of the wreck, obstructing me from reaching my destination.

I fan my legs out like a flailing sky diver to try to slow my decent and avoid crashing into the sharks with their rows of ragged teeth. I allow the anchor and chain to slip out of my hand and travel noisily ahead of me with the hopes of clearing a path through the partition of predators. The rattling of the chain startled a handful of the more skittish sharks causing them to bolt, but the bulk of them remain where I now must find a path through the gauntlet.

I manage to evade most of the sharks, but inadvertently kick a few with my fins. The sharks, startled by my sudden appearance, are darting around in all directions bumping into one another as I weave my way through. The backwash from the thrashing tails nearly dislodges my mask; all I could do was shield my face with my arm and swim hard for the wreck that was now visible below.

With a clank, the anchor touches down first on to the remaining hunks of metal decking and I-beams as I follow behind. Once on the safety of the wreck, I pause a moment to have a look around. Sharks are everywhere, but somewhat dispersed due to the noisy foreign invader that just dropped down from the mysterious world above.

I find a stout piece of wreckage and proceed to wrap the anchor chain around it. Once secure, I transmit a simple message to the captain: “OK, OK, OK”. Soon after, the anchor line comes tight as it was tied off to the cleat up on deck. I pause to see if the tie in location is strong enough to endure the enormous strain from the boat being pushed about by the wind and sea. After a few moments all seems well. The journey is over and I hover over the deck and take a deep breathe. The tie in experience was both nerve racking and exhilarating. This jumble of contrasted feelings occurring simultaneously is enough to satisfy any adrenaline junky.

While unwinding, I transmit a condition report to the captain so he can relay this information to the eager divers above, waiting impatiently for their turn to dive with the sharks. I press the button on the microphone and state in a clear voice, “60 feet of ‘viz above the wreck; 25 feet mid water and less than 15 on the very bottom; 78F degrees with a light current running from stern to bow. Over”. “Roger that”, comes the reply from the captain. “Are there any sharks?” he asks. “A few” I say in a wry, but joking tone.

Once finished, it was time for me to have a swim around the wreck and spend some time with my ‘friends’ before returning to the boat to help out on deck.  As I swim, I see sharks above and below as well as 360 degrees around me. Some are swimming in and out of the structure of the remaining I-beams that, in the hazy water, resemble an eerie apocalyptic image of a gutted skyscraper.

Once I drop below 80’ the visibility worsens and the rush of not being able to see the sharks around me enhances my senses. I could only hope the perception of the sand tiger sharks are sharper than my own which will prevent an alarming head on encounter. 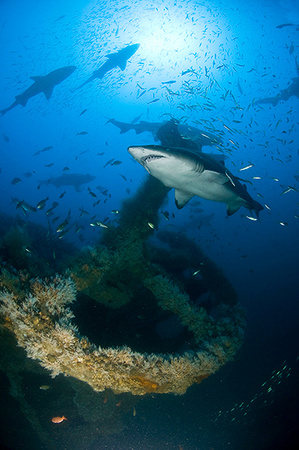 As the minutes pass, some of the largest sharks I have ever seen slowly emerge from the turbid water. All I can do is subtly change course to avoid contact. Logic tells me that size matters down here and that I should be the one to yield to the on-coming traffic. These animals are more scared of me than I am of them, but it doesn’t feel like it when a 10 footer swims directly at you.

After a few minutes, I ascend back to the clearer water above the thermocline to enjoy the view once again. There are more than just sharks to admire on this dive. Large schools of Atlantic spadefish swim above me unhurriedly in the gentle current, while jacks excitedly chase darting balls of baitfish in and out of the safety of the wreck. Every so often one may even see a sand bar shark or if you’re lucky, a hammerhead pass by.

I emerge out the side of a large bait ball and am stopped in my tracks at the sight before me. Through the hazy water, I make out a school of sand tiger sharks all swimming gently in to the current in mid-water; a line stretching farther than I can see.

I approach the mass slowly, maneuvering carefully, trying not to scare them so I can join in on the congregation.  Once settled within the school and heading in their direction, I attempt to count their numbers only to quit once I reach eighty. There were more sharks than I could count. With only 40-50 feet of visibility, whose to say how many more lay beyond the fringe of my vision.  This was the biggest gathering of sand tigers I had ever seen and I was awestruck at the sight. 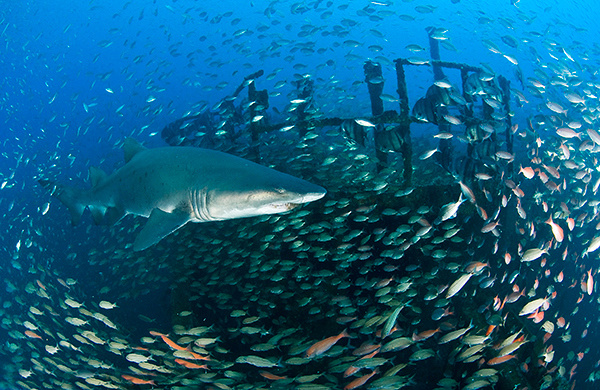 Eventually, I begin making my way back to the anchor line to begin my ascent only to come across divers who, by now, had made their way in to the water from the boat. I did my best to guide them to where I saw the schooling sharks, but many were so distracted with the spectacle of marine life before them and paid little mind to my presence.  With sand tiger sightings everywhere on the wreck, there would be little doubt that all participants in this dive would have their fill of these remarkable creatures before the day was over.

Back on board the boat, the excitement of the dive continued on with each diver telling tales of ‘derring-do’ amongst the hordes of sharks. The atmosphere was electric. The dive left an indelible mark on me from this day forward and sand tigers and sharks in general have become one of my favorite marine life encounters.

The year was 2002. Since then, I have had the pleasure of living and working for many years in such places as Africa, Truk Lagoon and Vanuatu, but the many memorable dives like this one continue to pull me back to the North Carolina coast to live, work, and dive.

Today, I am the captain of the very same dive boat I worked on as a mate in 2002. When not tending to my boating responsibilities, I spend much of my dive time photographing and filming the sand tigers and other shark species endemic to the wrecks. I have been fortunate to film this schooling phenomenon numerous times as well as many other captivating moments.

Shark diving has been gaining in popularity in North Carolina at an increasing rate over the years. Federally protected in the United States since 1992, sand tiger shark populations are making a comeback from devastating fishing practices decades prior. Once feared, shunned and even hated people are now embracing them and better understand the vital roll they play as apex predators in balancing our marine ecosystem.  Those who intentionally seek out close encounters with sand tiger sharks are creating an industry where there was none before. This interest in shark diving as a recreational activity can promote the recovery of the species by creating economic incentive to maintain healthy populations of these sharks by coastal communities.

With their grim smiles and sinister looks, the sand tiger has a long way to go in obtaining the same endearing status as dolphins, but with continued education and improved understanding there is hope for the survival and even proliferation of the wreck denizens of North Carolina, as well as all shark species worldwide.