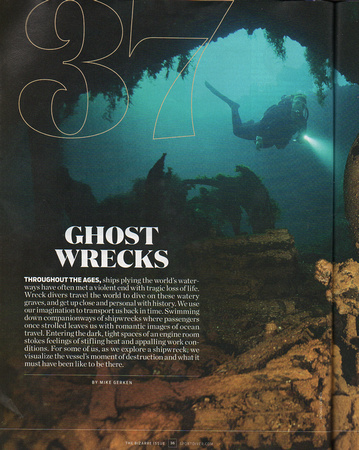 Throughout the ages, ships plying the world’s waterways have often met violent ends with tragic loss of life. Wreck divers travel the world to dive on these watery graves to get up close and personal with history. We use our imagination to transport us back in time. Swimming down companionways of shipwrecks where passengers once strolled leaves us with romantic images of ocean travel. Entering the dark tight spaces of an engine room stokes feelings of stifling heat and appalling work conditions. For some of us, as we explore a shipwreck, we visualize the moment of destruction of the vessel and what it must have been like to be there.

We picture torpedo’s ripping through steel hulls with torrents of water rushing in to the wounded vessel or a ship being torn apart in a violent storm and sent to the bottom. These macabre thoughts are not met with excitement but with due respect and solemnity.

Some wreck divers often wonder, do the anguished souls of the crew and passengers who perished haunt those who dare to explore the shipwrecks remains?  If you wreck dive long enough you will hear tales of divers who were left with a bone-chilled feeling of this sort. Some indicate there was merely an eerie mood cast over a wreck while others have indicated they saw something down there that they can’t explain.

I have been wreck diving for most of my 25-year dive career while spending more than 10 of those in Chuuk, Micronesia, location of the Japanese wrecks of Truk Lagoon. Many of these wrecks met a fiery end with heavy casualties when attacking US planes bombed and sank them during WWII. The ghost ships of Truk Lagoon, as they have become to be known, have numerous stories of the strange and inexplicable. 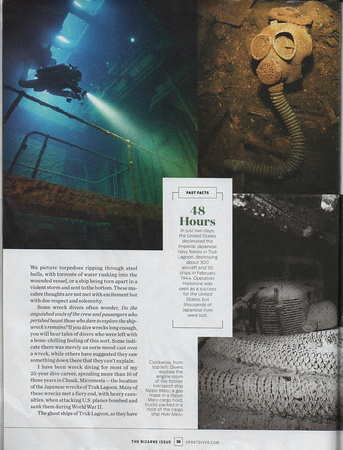 One diver recalls a moment while penetrating a section of one of the wrecks. He looked behind him to see that his dive buddy did not enter the wreck with him but was hovering cautiously outside. After the dive, when asked why he didn’t enter, the dive buddy said he saw too many lights and divers inside and thought it was too crowded. The diver who had entered was absolutely sure he was by himself. Others have reported seeing dark human like images moving fast in and out of the shadows of the wreck. Is it nitrogen narcosis, an overactive imagination or something more fantastic?

If you speak to some of the local dive guides in Chuuk there is absolutely no second-guessing what is being seen. They will tell you with a matter of fact tone that they are sea ghosts; the souls of those who have perished. Some of the sea ghosts can cause illnesses requiring a type of exorcism to rid the body of them. There are bad sea ghosts and good ones or so I have been told.

Many years ago while working on a liveaboard in Truk Lagoon, we had hired a local man as the new assistant engineer. He was a hard working talented individual who was excited at the prospect of working on board. It was a coveted job. However, after one week the man approached me and expressed his sorrow that it wasn’t going to work out. When I asked why, he merely said, “it’s the sea ghosts from the wrecks”. He wasn’t even a diver but still experienced a presence on board the boat. I did not pry further and respected his feelings on the matter.

During the initial raids on Truk Lagoon in February of 1944 there were estimates of up to two-thousand Japanese casualties due to the sinking’s. One ship, the Aikoku Maru met its end when a massive explosion ripped the entire forward half of this 500’ long vessel apart. Over 700 army personnel and crew were killed instantly in the grisly explosion. For decades the bones of the dead were piled high inside the ship. 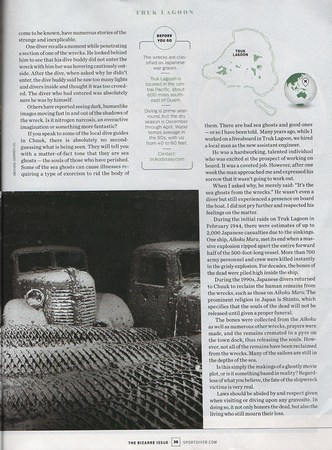 During the 1990’s Japanese divers returned to Chuuk to reclaim the human remains from the wrecks such as those on Aikoku Maru. The prominent religion in Japan is Shinto, which specifies that the souls of the dead will not be released until given a proper funeral. The bones were collected from the Aikoku as well as numerous other wrecks, prayers were made and the remains cremated in a pyre on the town dock thus releasing the souls. However, not all of the remains have been reclaimed from the wrecks. Many of the sailors are still at the depths of the sea. Is this simply the makings of a ghostly movie plot or something more factual?

Regardless of what you believe, the fate of shipwreck victims is real. Laws should be abided by and respect given when visiting or diving upon any gravesite. To do so would not only honor the dead but the living who still mourn their loss.